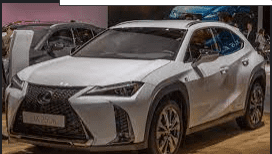 The RX450h 5-door wagon joins the hybrid model for Lexus Hybrid Drive means that the vehicle contains a gasoline engine and front and rear electric motors for power. The two-hybrid power sources are stored onboard the vehicle: 1. Gasoline is stored in the fuel tank for the gasoline engine. 2. Electricity stored in a high voltage Hybrid Vehicle (HV) battery pack for the front and rear electric motors. The result of combining these two power sources is improved fuel economy and reduced emissions. The gasoline engine also powers an electric generator to recharge the battery pack; unlike a pure all-electric vehicle, the RX450h never needs to be recharged from an external electric power source. Depending on the driving conditions one or both sources are used to power the vehicle. The following illustration demonstrates how the RX450h operates in various driving modes.

During light acceleration at low speeds, the vehicle is powered by the front and rear electric motors. The gasoline engine is shut off.

During full acceleration, such as climbing a hill, both the gasoline engine and the front and rear electric motors power the vehicle.

During deceleration, such as when braking, the vehicle regenerates the kinetic energy from the front and rear wheels to produce electricity that recharges the battery pack.

While the vehicle is stopped, the gasoline engine and front and rear electric motors are off, however, the vehicle remains on and operational.

Help us to keep going

This website uses cookies to improve your experience while you navigate through the website. Out of these cookies, the cookies that are categorized as necessary are stored on your browser as they are essential for the working of basic functionalities of the website. We also use third-party cookies that help us analyze and understand how you use this website. These cookies will be stored in your browser only with your consent. You also have the option to opt-out of these cookies. But opting out of some of these cookies may have an effect on your browsing experience.
Necessary Always Enabled
Necessary cookies are absolutely essential for the website to function properly. This category only includes cookies that ensures basic functionalities and security features of the website. These cookies do not store any personal information.
Functional
Functional cookies help to perform certain functionalities like sharing the content of the website on social media platforms, collect feedbacks, and other third-party features.
Performance
Performance cookies are used to understand and analyze the key performance indexes of the website which helps in delivering a better user experience for the visitors.
Analytics
Analytical cookies are used to understand how visitors interact with the website. These cookies help provide information on metrics the number of visitors, bounce rate, traffic source, etc.
Advertisement
Advertisement cookies are used to provide visitors with relevant ads and marketing campaigns. These cookies track visitors across websites and collect information to provide customized ads.
Others
Other uncategorized cookies are those that are being analyzed and have not been classified into a category as yet.
SAVE & ACCEPT
Powered by